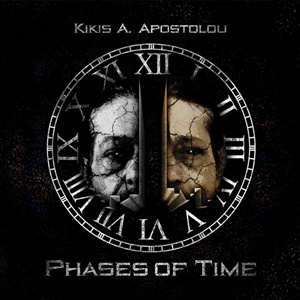 A guitarist for over 30 years, Kikis A. Apostolou has been a part of Greek metal bands like Armageddon Rev 16:16, Arrayan Path, and Chainsheart during his career. For his first solo album Phases of Time, the combination of vocal-led songs and instrumental offerings gives the listener eleven tracks to delve into all sides of the coin, from melodic and power metal to standard guitar-oriented fare. It’s clear that his style encompasses a wide swath of 70’s, 80’s, and even 90’s artists – always alert to keep catchy hooks and refrains a part of his compositions even as he showcases the arpeggio tricks and neo-classical leanings.

The opening two instrumentals “Under Confusion” and “Shadows of an Angel’s Wings” deliver two different textures for Kikis. The former is more in line with Stratovarius or Kamelot in terms of its marching aspects and exotic soloing measures, the latter allowing a playful keyboard/guitar synchronized template as the guitars shift into Symphony X meets Black Sabbath chugging pastures as well as an emotive, bluesy solo break wins points for versatility. Sprinkling in poppy/peppy keyboards induces 80’s flashbacks – while the guest vocalists include Nicholas Leptos (Arrayan Path), Jimmy Mavromatis (Armageddon Rev 16:16) and Tania Kikidi among others which gives the record the dynamic depth it deserves, as each singer brings a different power and energy to the songs they perform on. “Through Laughter and Cries” for instance features a mid-tempo groove and slower twin guitar accents, while the quieter music under the verses gives the arrangement an epic, Fates Warning-esque feel for Tania to rear back and reach some upper echelon notes through her obvious talent in that arena. Cascading rain signals “Heaven Wish”, another restrained instrumental that opens up Kikis into thoughtful clean picking and smart tapping/ note holding activities – proof positive that even in instrumental settings you can push beautiful, positive emotions in a melodic landscape.

Phases of Time has that dual appeal to those familiar with his work in the melodic/power metal realm, while also delivering some varied instrumental material that doesn’t over-shred or become a ‘look at me’ showcase. Kikis A. Apostolou brings plenty to the table and should leave most people praising his execution.