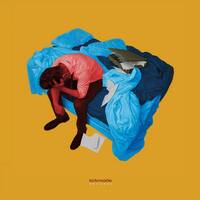 Always dug the name; “Kill Everything Now” Mode, which really, is should how any good metal band should operate. Well, not every good metal band – some prefer the more thoughtful and/or tender approach. But for this noise-addled power trio from Canada, it’s fitting. They’ve gradually grown in visibility over the years, highlighted by 2013’s storming Entrench, which garnered the band all sorts of nice attention from the metal press contingent. Success, KEN Mode’s sixth album overall, is equally locked-in, and perhaps moreso, pissed.

Recorded by producer extraordinaire Steve Albini, Success is hardly a subtle listen. Instead, it’s jarring to the bone, riffed-out with post-punk guitar action, shaky tempo shifts, and above all else, the sarcastic-in-house vocals of Jesse Matthewson. In most cases, Matthewson would be considered a tad on the annoying side, as he’s flanking out with sardonic quips, realized real-life quips, and anything else that’s furrowed his brow, but placed in the context of the band’s well-jumbled sound, it’s total rage. And vitriol. The album effectively spikes on “Dead Actors” (lots of rhetorical lobs) and the well-meaning “These Tight Jeans,” where he rails about negativity and all of its supposed glory.

Wrong-side-of-the-bed noise rock/metal is a clip not found too often in today’s scene. It’s probably why various accolades have come KEN Mode’s way, like a Juno Award a few years ago. Funny that our friendly neighbors to the north would recognize such a band like KEN Mode. But then again, albums like Success, and the band’s overall approach lend heavily to the dominant notion that KEN Mode are a singular entity not to be messed with.