Kayotik – Enslaved to Chaos (The Orchard) 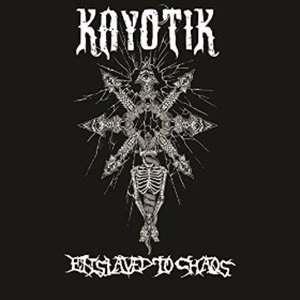 Even though this scribe tends to review more of the melodic, power, progressive, and traditional sides of the metal genre – growing up in the tape trading era affinity for the early roots of death metal still crop up in new acts from time to time through the in box. After witnessing this three-piece live and at peak volume, Kayotik from Berlin, CT submit this full-length to obliterate the senses through a sonic, crushing assault that takes you back to the early 1990’s American movement, while also keeping in mind the technology advances and proficiencies of metal musicians in the current scene. It’s surprising to not know about this band who’ve been together since 2006, but good things come to those willing to seek out quality.

The first noticeable thing about the band is the prominent bass play for vocalist Tom Calver – he often propels the material with an Atheist-oriented progressive charge, taking “Butchery” for instance into another level of technical prowess as you submit to this low-end fusion of terror. Occasionally incorporating a thrash-level of differentiation during the chorus of the title track, the band for the most part favor a blasting approach when it comes to drummer Darrin Yardley (also from the band Continuum) that works in a Morbid Angel/Immolation fashion, allowing the hornet’s nest, swarming Dave Yardley guitar action on “Human Farming” to fester deep in the crevices of your body. Dave also contributes occasionally high pitch screams that contrast the rapid-fire growls and guttural main microphone duties for Tom, right in line with the death music to make “Brute Force Bloodshed” and “Terminal Ballistic” two neck whipping favorites.

The nine songs blitz the airspace in an economical twenty-nine minutes and change, understandable given the quick hitting nature of the riffs and overall sheer brutality on display. It’s obvious that Kayotik study the craft of death and grind well, intertwining a lot of progressive bass passages that keeps anticipation on high for the next segment shift and song. Add in lyrical content that volleys between environmental concerns for “Pollutionation” to violence begetting violence for “Man Is No More” that reaches beyond the normal horror/gore fare and you’ll understand quickly Kayotik isn’t your average, predictable death act.

Enslaved to Chaos illustrates the long-lasting underground appeal of death metal – and hopefully will elevate these CT gentlemen to larger, faithful audiences around the globe.