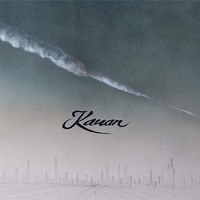 What a peculiar combination of elements this one is. Kauan is a Russian band who sings in Finnish and works the disparate worlds of funeral doom, folk, and even minor trappings of post-rock together into a swirling and ultimately confounding miasma of thrilling misery. Pirut presents us with a single flowing 39-minute piece that is split up into eight sections, though realistically to listen to any of these individually sets the listener to fail as each one is built upon and connected to those that come before and after it. Motifs and themes ebb and flow in and out of the work as it flows along and, it must be stated, for best results one should indulge this in its entirety.

As for the work itself, I must admit a fair amount of surprise in working my way through this obscure Russian discovery. The introductory portions of “I” introduce the theme of the album’s artwork, that of the asteroid that came down in Chelyabinsk earlier this year, a fair degree of surprise in the sudden shattering of glass and the subsequent screams of those passing by. Elsewhere across the work one will find a smattering of clean vocals giving way to the utmost in doom growls and rich orchestration layered atop funeral dirges that eventually give way to soothing folk/string binges. At times the band even goes further off the beaten path with the likes of centerpiece “V” and its positively thrilling solo sections.

Pirut is an unexpected gem for this late time of year and one surprisingly fitting for the often gloomy surroundings of the season. A release that is certainly much more than the sum of its many disparate parts and at times shockingly beautiful in its presentation, you could certainly do worse among the wasteland that is this time of year for new releases. Embrace these peculiar folks and the eccentric brand of awesome they create, your life will be better for it.