Kataklysm – Waiting for the End to Come (Nuclear Blast) 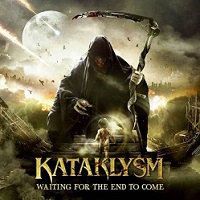 One of the first names that come to mind when thinking of song-oriented death metal, Montreal’s Kataklysm have steadfastly remained glued to the sonic attributes of under-appreciated albums such as 2001’s Epic, 2002’s Shadows and Dust, and even more recently, 2010’s Heaven’s Venom. Much like Amon Amarth, you know what you’re going to get with Kataklysm, but in contrast to the Viking Swedes, the Canadians are far more explosive, heavy, and versatile, traits that are backed up once again on Waiting for the End to Come.

The script for this platter might be familiar, but the absence of long-time drummer Max Duhamel threatened to throw a wrench into the band’s plans. However, the temporary addition of Neuraxis skin-basher Oli Beaudoin has solidified the drum stool, with the sticksman offering up an array of Kata-friendly beats, as well as his own take on extreme metal drumming. Therefore, Duhamel’s absence – while notable – isn’t a total detriment to the songs. The jugular-attacking “Fire,” “Kill the Elite” and “Under Lawless Skies” certainly back that claim up.

Such hardened, melodically-enabled cuts such as “If Was God…I’d Burn It All,” “Like Animals” and closer “Elevate” serve to uphold Kataklysm’s functionality as something more than just hyperblast fiends. “Elevate” in earnest, is probably the album’s go-to number, as a spiraling lead melody from Jean-Francois Dagenais sets the pace, while lead throat Maurizo Iacono does his patented Greek roar of death. It’s no wonder the band has yet to fuck with the template they’ve been running with since their 2000 “comeback.” As such, Kataklysm remain a singular and imposing entity in the death metal scene. Waiting for the End to Come does not disappoint.