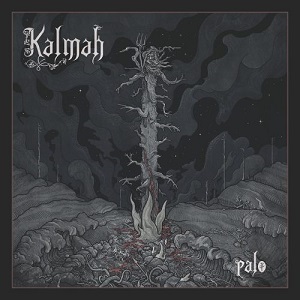 One of those “in a perfect world they’d be huge” bands, Finland’s Kalmah are as reliable and captivating as any outfit from their homeland, yet, mass underground acceptance continues to elude them. Maybe it’s because their songs don’t have the same attitude and sass as Bodom…we’re not quite sure, but considering Kalmah has yet to even play a show on these shores speaks to how far they’ve yet to go. But, that’s not of consequence for now — Palo strafes those melodies, tells those swamp tales and puts out solo pyro like a classic Kalmah record should.

Lead guitarist Antti Kokko remains the engine of the band, his guitar exploits setting the table for ten songs here. He’s always had this identifiable edge to his playing — action-packed, yet never garish; there’s some control and smarts to his playing, even as he attacks the Finnish melodic death metal floor. Lead single “The Evil Kin” works in a bursting open riff, while bright, dazzling harmonies weave through “The World of Rage,” “Into the Black Marsh” and “Through the Shallow Waters,” the latter serving as Palo’s high-point, especially when Kokko and keyboardist Veli-Matti Kananen join forces for a guitar-keyboard dual.

Gobble all ten of these songs at once and they’re rather strident, almost effortless jabs of melo-death. It’s like Kalmah has been doing this for years, which they have, 20, in fact, properly serving the Finnish metal underground and their native swamplands. While other bands have given them a run for their money (Omnium Gatherum in particular), Palo shows that the heart of Finnish melodic death metal lies within Kalmah.