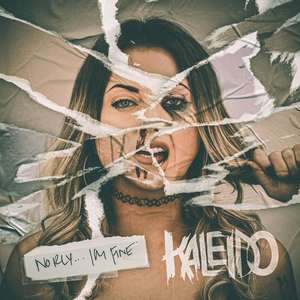 Detroit-based Kaleido is one of those bands that seem to openly defy simple categorization. One can quickly look up their previous releases and discover a wealth of different songs that embody a large variety of influences and sounds outside the usual rock, metal, and pop framework. It’s also easy to see that they’ve managed to acquire a bit more heaviness into their arsenal with their current EP, NO RLY…IM FINE and it suits them perfectly.

With only 4 songs to peruse, what really makes the EP work is the aforementioned diversity. Even within a single track, there’s a lot to take in despite the easy to digest and readily available hooks, and each song has a distinct personality to it. Opening track “Eating Me Alive” swirls around in a slow boil with a noticeably playful rhythm section and light grooves until it reaches the first chorus, where a more thunderous riff kicks in around Christina Chriss’ charismatic vocals and the sound continues to swell over the course of the track. Chriss’ potent vocals are something that’s solidified in the opening moments of “My Fire,” as gentle singing then escalates along with an upbeat and insidiously catchy riff into something really emotive. But as noted already, moments of heaviness creep into each track and augment it with depth that other like-minded bands ignore. This is most notable on the last song, “Blood,” which deploy a fair share of punchy/groove-laden riffs as Chriss goes into some harsh screams (which also appear in lesser amounts in the remaining tracks) – something that shouldn’t turn off rock fans and will undoubtedly cause some metal fans to stand up and take notice. Also of note are the relatable and well-written lyrics, of which “Pretending” stands the strongest in its stance of tackling some tougher issues with some genuine heart (and hence avoiding cliché-driven territory).

Never at a lack for energy or passion, NO RLY…IM FINE locks in Kaleido as a rising act that is beginning to bubble to the surface and rightly demand some attention. There’s a clear knowledge of how the hard rock genre is effectively written with big, attention-getting hooks and sing-a-long choruses, but with a knack for experimentation and the ability to pull in outside genres in ways that give the band a more unique platform and reach.