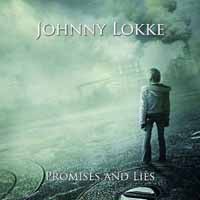 Essentially a one-man band playing traditional-beyond-traditional metal, Johnny Lokke won’t make anyone forget the mandatory works of Priest, Maiden, and King Diamond (three bands the man borrows from heavily), but in this age of being a throwback for the sake of being a throwback, Lokke at least knows how to throw together a good tune or two.

Promises and Lies is the man’s third album, drawing a direct line to an era when changing the tempo was unheard of, and the chorus was king. Well, Lokke does all of that and then some during this 12-song outing. Lokke has an excellent voice, oftentimes ranging from Ripper Owens-like tones (“Starchasers”) to King Diamond rafter-scraping highs on “Heal Me,” where the man really does sound like everyone’s favorite Dane. All this points to the notion if a higher-profile (or not) band needed a suitable singer, Lokke should be on their short-list.

Musically, Lokke keeps it in 4/4, with basic, simplistic riffs. Since most of these songs are so locked-down (no pun intended, promise), Promises and Lies suffers from the same indignities most albums of this ilk do – it gets close to being stale by the midway point. Credit Lokke for mixing up his vocals though; he clearly is a top-notch arranger of vocal melodies and harmonies, but there’s not a lot of meat on the bone, if you catch our drift.

Many will knock this for being too dated-sounding (it is, on some level), yet in this age of processed drums, and easy-fix Pro Tools production jobs, Promises and Lies sticks out like a sore thumb. And it should – Lokke comes from a different era and while no fault of his own, it’s what ultimately holds back Promises and Lies. Hopefully the man gets a call to move up to the big leagues…