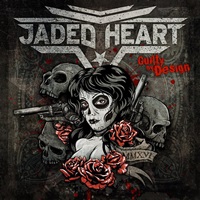 The epicenter of heavy metal and hard rock support in Europe resides in Germany – having a long standing tradition of domestic output and great fan attention. Arising from said scene, Jaded Heart is a top class band in existence since 1993, becoming semi-Swedish in membership during 2005-06 by adding singer Johan Fahlberg and guitarist Peter Östros to the fold. Chances are most North Americans though only have a cursory glance at their discography – not receiving proper label support or distribution here, even though Guilty by Design represents their 12th studio album.

Lucky to be privy to a number of their records through other writing endeavors (2007’s Sinister Mind and 2012’s Common Destiny registering well in the memory banks), Jaded Heart as a quintet serve up a dozen songs of melodic metal that have as much to do with 80’s hard rock from the Sunset Strip as a lot of those 90’s European bands who felt the need to heavy up the guitar tone a touch. Johan’s bluesy Urban Breed meets Tony Martin register molds well to the material at hand, as he also possesses the right amount of bravado and lung power to sustain memorable choruses for “No Reason” and the highway cruising “No Waiting for Tomorrow”. Masahiro Eto and the aforementioned Mr. Östros handle axe duties admirably – crunchy and heavier when called for during “Watching You Die” while adding a couple of neo-classical/shred tricks in the mix for “Bullying Me” that put the band close to a more down to earth Firewind or the much missed Letter X for comparison’s sake.

During some of the instrumental sections Jaded Heart definitely veer into common groove techniques, occasionally a little modern leaning for “Watching You Die” which could be interchangeable to the Shinedown/3 Doors Down followers of corporate radio – fortunately the layered vocal harmonies and passionate Fahlberg delivery pushes a fairly generic cut into one a tad more entertaining. The American hard rock aspects come to the forefront in terms of the straightforward groove and pumping power chord action within a track like “So Help Me God”- the locked in bass and steady drumming trademarks that put Skid Row and Dokken on to commercial acceptance throughout their 80’s/early 90’s heydays.

Harkening back to a Headbangers Ball/Dial MTV timeframe when melodic hard rock/metal ruled the roost, Guilty by Design will satiate those hordes who desire compact hooks and harmonies that leave you smiling in the aisles.