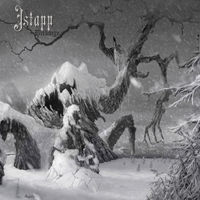 “Icicle black metal.” Let’s run with it. Sweden’s Istapp (which stands for “icicle” in Swedish) may have one of the more unique names in black metal, yet they’re awfully adept at merging the sacred sounds of Windir, early Borknagar and for a far-left reference, Taake. On their second full-length Blekinge, the trio present a wealth of memorable

ideas, all virtually in line with one another that creates one of more balanced melodic black metal albums we’ve heard of late.

At the core of Blekinge finds Istapp utilizing those streamlined, tried-and-true melodies often found in mid-90’s BM. Such tactics work to great effect on “Köldens Unionv” and the brisk “1160 (Miovik).” When the band wants to blunt, they hit us with “I Väntan På Den Absoluta Nollpunkten,” which is perhaps the biggest nod to Taake here, save for some folk-oriented clean vocals that are right on the money.

Once we get into the back-half of the album, Istapp continues to lay on the gas pedal, unleashing the manic “Snö” (love the riff at the 39-second mark), triumphant “Fjällhöga Nord,” and quite brutal “Bortgång Af Alvrödul, Ljusets Förfall.” Sure, there’s a direct thread between most of these songs (speed, blast-beats, and big melodies), but Istapp is able to provide some form of distinction between these jams, something their counterparts often struggle with.

A wise pickup by Metal Blade (we’re guessing MB’s very-competent Euro division found these guys), Istapp emerges as a band to keep an eye for in black metal circles. An album as savvy and self-aware as this doesn’t happen too often, especially in the “blinders-on” world of black metal. Killer stuff…now make those “Troo Icicle Black Metal” shirts and we’re all set.