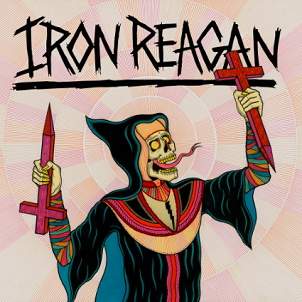 Timely given our current political landscape (you won’t find such discussions on these pages, though), Iron Reagan’s Crossover Ministry serves to press many hot-topic buttons. Punk-on-metal with commentary as this has largely served to function as a voice for the politically and socially aware, which can either be a bore or enlightening, depending on one’s preference. Regardless, Iron Reagan–not unlike sister band Municipal Waste–have come to master the in-and-out song, with Crossover Ministry emerging as their tightest batch of jams to date.

Eighteen songs at 30 minutes, so it’s a matter of keeping up with Tony Foresta’s backward ball-cap’s spirited, beer-toting delivery. While there’s virtually no separation between his work here and in Municipal Waste, you can spot Foresta’s quick-tongued vocals from a mile away on “You Never Learn” and the chunky “Dead With My Friends,” which is perhaps his most spirited run in the bunch. “Fuck the Neighbors” should become a modern-day party anthem (although it could be a bit longer), while the sharp, rampaging “Blatant Violence,” “Bleed the Fifth,” and “Twist Your Fate” pile on gang vocals, DRI-like riffing, and rampant pounding from drummer Ryan Parrish.

Now far more than a novelty band comprised of a bunch of longtime scene dudes, Iron Reagan has entered into legitimate band territory. Crossover Ministry is certainly vibrant and edgy, boasting timely tunes that can either be lighthearted, or have meaning. This type of duplicity isn’t found too often in metal circles. May Iron Reagan continue to enlighten (and amuse) sweaty dudes in the pit and beyond.