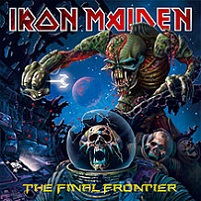 Boy, Maiden sure is making a lot of people wonder with this album title. If this truly is the “final frontier,” then let’s forget the last several legs, ’cause The Final Frontier is another skirtish, bloated record. A Matter of Life and Death hovered around being average, but this…it’s becoming readily obvious that Maiden has become a little too self-aware in their old age. This is a very tired sounding album, save for a few moments when the band sounds like it wants to be in attack-mode. Realistically, there’s still too much huffing and puffing around in the progressive metal arena to allow this to even approach Brave New World or worse yet, Fear of the Dark.

Seeing Adrian Smith’s name plastered all over the songwriting credits was an encouraging sign. After all, he is Maiden’s best guitarist and only other reliable songwriter, responsible for the likes of “Flight of Icarus,” “Two Minutes To Midnight,” and “Wasted Years,” all of which are some of Maiden’s most commercially-viable (and best) songs. Knowing Smith’s penchant for simple, song-oriented structures, it lent hope to The Final Frontier following in that vein, but instead, it’s more of this quasi “progressive” rock/metal angle that first popped up on Brave New World. The songs are long, usually taking their good ‘ole time in getting the point and when they do (ref. the very lame “El Dorado” and “Starblind”) there’s not much to be excited about.

Bruce Dickinson has managed to keep his voice in relatively good shape, hitting some high notes during the aforementioned “El Dorado” and enjoying a nice moment during the chorus of album highlight “Coming Home.” In other spots, he sounds strained and unconvincing, like on “Isle of Avalon,” a song that once again, suffers from Maiden’s (i.e. Steve Harris’s) annoying habit of building up each song with clean, gently-strummed guitars. This disturbing habit builds steam throughout the album, and of course, is front and center on album closer “When the Wild Wind Blows,” the second longest song in the band’s history, only behind “Rime of the Ancient Mariner.” And no, it doesn’t even approachPowerslave’s epic-to-end-all-epic’s of album closers.

When Maiden is on the offense (something that hasn’t happened in 10 years), they’re still capable of capturing the brash spirit of their prime. The Final Frontier, though, is akin to prevent defense; Maiden appears to be content with setting back, prolonging things when they don’t have to, essentially giving up the field. One can make a fuss about how charming this now out-of-touch progressive binge the band is on, but the truth of the matter is that it has made Maiden appear very lethargic and plain old. Guess this was bound to happen eventually…