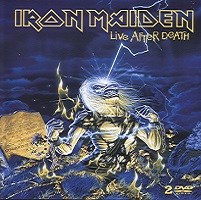 The second part in Maiden’s “Story Of” series, the Live After Death DVD not only features the live concert

in which bears its name, it also contains a 60-minute documentary detailing the recording of the Powerslave album and the massive world tour that ensued. Now finally on DVD

after years of bootlegging, this two-disc set is literally spews some cool odds and sods from Maiden’s glory years.

Shot live at the Long Beach Arena during a four night run from March 14th to the 18th of 1985, the Live After Death DVD shows the band at its arguable peak, although demonstrating obvious strain from a grueling tour schedule. This fact is none more evident in singer

Bruce Dickinson, who struggles throughout the set to hit the soaring high notes in “Aces High,” “The Trooper,” and “Flight of Icarus.”

Set highlights include the epic-of-all-epics “Rime of the Ancient Mariner,” a true testament of Maiden’s live prowess that still resonates as one of metal’s all-time classic songs. “Powerslave,” the ever-versatile “Revelations,” and the fun “Run to the Hills” and “Running Free” are spot-on, and given some extra energy courtesy of Steve Harris’ basslines. Of particular note is how fluent the guitar duo of Adrian Smith and Dave Murray are, who practically wrote the book

on twin guitar interplay and shine throughout this set.

portion is the real treat, with all five members (Dickinson, Harris, Murray, Smith, and McBrain) telling their side of the Powerslavecomplete with stories of in-fighting (Bruce once secretly taped a Harris vs. McBrain squabble), McBrain’s quick dive in a swimming pool during a scorching set in Sacramento, producer Martin Birch’s propensity to get silly when drunk, and getting cabin fever in a bus criss-crossing the USA. It’s all here and then some.

Maiden has always had a way of doing things right and in comparison to other DVD’s that have hit the market of late, that certain air of quality abounds onLive After Death. This part of the story is great, but the real fun should begin when the band delves into the Somewhere in Time/Seventh Son era, a point in time that nearly broke the band apart, setting them up for their gradual downfall in the dreaded 90’s. What a story, up the Irons… 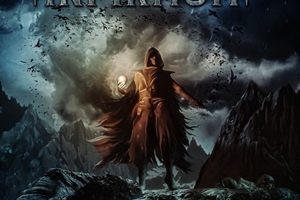 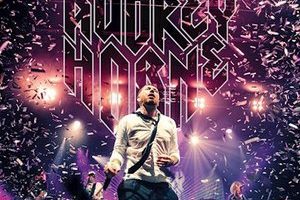 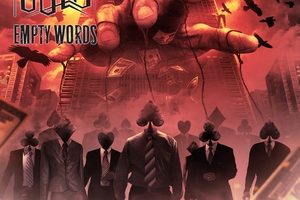 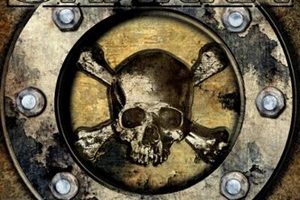