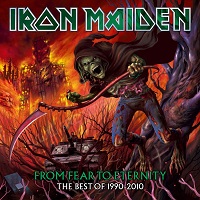 Perhaps no band leverages their back catalog more than Iron Maiden. You’d do it too if you had 15 studio albums and a handful of live albums to your (untarnished) name. But man, the 90’s were not kind to Maiden, but give them credit for having the gall to want to revisit various portions of it, including the much-maligned Blaze Bayley era. As evidenced by the title, From Fear To Eternity: The Best of 1990 – 2010 covers the band’s output from the 90’s and into the 00’s on a 2-disc set. And thankfully, no sign of “Como Estais Amigos” is to be found. Extra “scene points” to you if know what album that song closes…

Lots of obvious choices here, including “The Wicker Man,” “El Dorado” (which is a total clunker), “The Reincarnation of Benjamin Bregg,” and “Rainmaker,” which is perhaps the best post-Dickinson-reformation song of the lot. The band’s “singles” (including the above) have been a bit spotty, so there’s some padding courtesy of the brooding “Paschendale,” (courtesy of Adrian Smith) campy “Blood Brothers” and “Coming Home.”

Of major debate are the selections from No Prayer For the Dying, Fear of the Dark, and the Blaze-era cuts. “Holy Smoke” still has a juvenile thrust to it, as does “Bring Your Daughter…To the Slaughter,” a song the band should bring back into the live set. The Blaze-era is (wisely) smoothed over with live renditions (with Dickinson on the mic) of “Man on the Edge,” (cue the totallylame-o lyrics) “Sign of the Cross,” and “The Clansman.” It would be cool if Dickinson would give “Futureal” a go, but ‘tis not to be.

Even with a spate of near-perfect albums from the 80’s, Maiden is still willing to stick their necks out for their less-than-well-received era, a trait that resounds on From Fear To Eternity: The Best of 1990 – 2010. Granted, nearly all of these songs except “Fear of the Dark” are not classics and never will be classics, but they’re surprisingly sturdy and worth investigating if your Maiden vocabulary begins with Number of the Beast and ends with Powerslave.