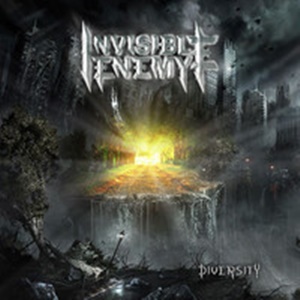 Born out of two members leaving X-Pulssion, Finnish band Invisible Enemy would take a few years of member shuffles the assemble the current lineup and record a debut full-length in the aptly named Diversity. We all know the major challenges in establishing oneself through those early growing pains, finding a set of musicians who have the same attitude, belief, and goals in mind to refine songwriting as well as perform and promote your efforts. After a few spins, these eight songs showcase an interesting blend of power/gothic-oriented metal with progressive and even straightforward/thrash leanings that may need some smoothing out but prove the quintet aren’t content to run down a trendy path.

The keyboard passages never dominate the proceedings, instead offering an alluring, dynamic element that speaks to more of the band’s progressive or gothic aspect to their approach – most obvious on the latter day Sentenced meets Queensrÿche-like track “Worthless Heart”. The stutter-step guitar approach against modern dance-oriented ivory parts opens the otherwise much heavier “The End of the Universe”, where the vocals fluctuate between Phil Anselmo-ish grit and screams to more of a Hetfield-oriented mid-range sneer. Instrumental moments allow these musicians to elevate their proficiencies, throwing in many neo-classical / shred aspects while occasionally developing cultural/melodic tidbits and takeaways. The material varies from shorter, four-minute focused songs to stretching out a few efforts to the six to seven-minute terrain – and occasionally adding female vocal support / tradeoffs for the outer galaxy feel within “Destination Unknown” or supplemental narrative sound effects to flesh out other ideas.

It’s difficult to tell out of the gate whether Invisible Enemy wants to hone in on a specific theme or truly enjoys floating to the beat of where their ideas take them – as diverse as they may be. In the future they may want to spend more money improving certain sonic aspects (the snare is decidedly loud in the mix), and the vocals can be an acquired taste at times where something a bit more aggressive or smoother would work. Overall, Diversity gives Invisible Enemy a decent platform to build upon, especially for those who seek out a band that isn’t afraid to mix up several sub-genres over the course of a record.