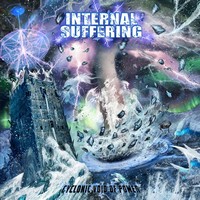 Veteran death metal act Internal Suffering has made a name for themselves on the end of insane speed and technical riffing, even if it has been 10 years since their last album. Their fifth full-length release to date with Cyclonic Void of Power, it’s clear the band isn’t out to reinvent themselves or the genre. But if you are looking for something that is going to strip the paint off the walls with intensity and heaviness, this is bound to give you a thrill.

Cyclonic Void of Power seems to operate best on one speed: as fast as the band can go. It’s frantic, riddled with blastbeats, and sure to take the listener aback with its fury. The riffing has that older, technical feel to it, more akin towards Suffocation than the more modern acts in this regard. Likewise, there’s some moments when the band moves things into slam territory – nothing at the expense of the relentless speed or brutality, but as a means to keep the band out of the blistering speed range every once in a while (see “Upon Mystical Gateways”). This is the type of thing that those that dig brutal death metal dig the most – to the layman, there’s not much differentiation from track to track. The critique of “it all sounds the same” is one that probably gets lobbed at the band from time to time, but if you go beyond the initial adrenaline rush, you can begin to notice the nuances that keep the album fresh as time moves on (check out some of the riffs of “Vanished From Cosmos,” for example).

There’s nothing on Cyclonic Void of Power that Internal Suffering fans will find out of the ordinary. They play to their strengths, and for that, it should be welcomed with open arms by those familiar with their work. It’s not going to move beyond the brutal death metal market, but it doesn’t need to either. A solid pick-me-up of sonic brutality.