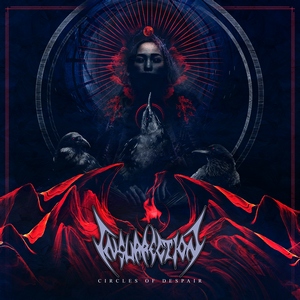 The best of melodic death/thrash can really get your adrenaline going. It’s got the fast riffs and frenetic energy that aim to barrel things over, while still providing a certain level of melody that makes things a bit more digestible and keeps it from becoming too much of the same old thing. A feeling that Insurrection seems to perfectly capture on Circles of Despair.

The entire album, with one short interlude as an exception, is a ball of energy. Frantic At the Gates-inspired riffing with a more overall brutal tone is what you get, and it gives you no breathing space. Opener “Enigma Machine” is in your face with aggression, and it’s only at the junction of a catchy lead that things switch too far up. There’s some groove in there to counter against having too much speed, but the riffs all bear teeth. The formula continues on with each track, and while some might say that is to the band’s detriment, they do a fine job of keeping it interesting. The riffing hits consistently hard, with that mid-tempo galloping serving up some excellent melodies alongside of it. Some speed-ups and already noted slow-downs into groove help, and the melodic solos and leadwork that’s on display on tracks like “The Deeper Depths” is worth noting. Lastly, going along with the assertive tempos are some intense vocals, which frequently feel raw and visceral in tone – a solid match for sure and gives the music some extra oomph on occasion.

There’s a sheer fun factor to the music behind Circles of Despair. It’s energetic tone brings a plethora of enjoyable riffs to the table, and that’s the best thing a band like this can aim for. Insurrection cast a raging spell that’s still full of melodic gusto, so for death/thrash fans, it’s a win-win.