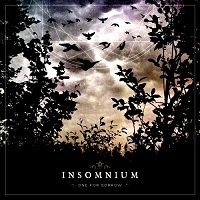 Five albums in, and you know what you’re getting from Insomnium. The Finns have tweaked their melodic death metal formula ever-so-slightly since 2002’s marvelous Into the Halls of Awaiting, popping out some rather enjoyable ditties along the way, including 2009’s Across the Dark. But on One For Sorrow, it appears the band is becoming precariously close to running out of new ideas, with just enough worthy songs to make it worth investigating. They are INSOMNIUM after all. (Capital letters used for emphasis)

As such, melody is still the band’s bread and butter, with those spiraling, twisting and turning lead guitar runs comprising the bulk of the album’s hooks and uh, “momentous” moments. Similar (and very familiar) refrains from the band have popped up quite frequently over the course of their career, with lead cut “Meandering Through the Shadows” sounding almost workmanlike, with its only saving grace a clean vocal chorus from singer Nillo Sevanen. On “Unsung,” Sevanen’s clean vox (which are more like an understated craw than anything) manage to lift up a delicate portion that sticks out like a sore thumb amidst the band’s usual melo-death tactics.

One For Sorrow eventually finds its groove toward the back end of the album, lead by the piercing intro of “Lay the Ghosts To Rest,” which is coupled with the chilling melodies (and more wonderful clean vocals) of “Regain the Fire,” making it the best song of the bunch. Probably the band’s most memorable song since “Change of Heart” from 2006’s Above the Weeping Word, “Regain the Fire” demonstrates a glimpse of what Insomnium can do when it wants to stray from its normal sound. The song is not only utterly hummable, but weaves a melodic spell (as in, they’re everywhere) that makes it one of the year’s better songs.

Curious to see where the Finns will go from here, as they most definitely have exhausted their sound on One For Sorrow. The great bands of our scene usually find ways to stay fresh while retaining their core elements, something Insomnium might have to figure out if they want to keep running with the big dogs of Finnish metal.