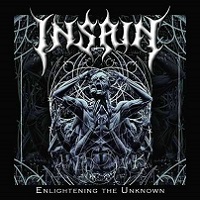 After only releasing one full-length album in 2010 (Spiritual Rebirth), France’s Insain are no more.  They did leave us with one final bow however, in the form of this Enlightening the Unknown EP.  It’s often bittersweet to listen to recordings such as these, knowing the band will no longer produce more material, especially when the material is of such high caliber.

Death metal typically involves frantic high-speed energy and copious amounts of blast beats.  Just think of some of the usual suspects of this variety (Hate Eternal, Hour of Penance, Zyklon) to paint a mental picture.  While somewhat derivative, Insain’s conviction and occasionally daunting heaviness will keep listeners attention for many listens.  The subtle uses of melody do not go unnoticed, keeping tracks like “The Scourge” from feeling like an outright blur of notes.  There are moments where Insain’s penchant for destruction can feel almost overwhelming in their brutality (see “Absorbing the Masse” and “Beyond the Stellar Remnants”), a compliment that doesn’t come easily from someone who listens to more than their fair share of death metal.

Worthy of mention with Enlightening the Unknown is that of the vocals.  With the considerable speed of the proceedings, the frequently barked vocals keep right up to pace, providing an additional layer of aggression.  There’s also an appearance by Daniel Neagoe (of fellow Kaotoxin doomers Eye of Solitude) as an added bonus.

Despite the sheer heaviness of Enlightening the Unknown, it’s hard not to at least feel some sorrow for what’s not to come.  With the pedigree of this album, it’s foreseeable that Insain could have potentially moved far up the ranks with future releases (let alone this one).  File this swansong as one that came far too early.  RIP Insain.