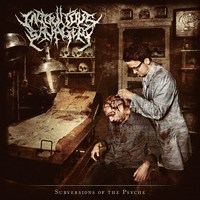 When one thinks of Scotland and death metal, the first band that comes to mind is that of Man Must Die. Countrymen Iniquitous Savagery are relative newcomers to the table, doling out only 2011’s Compelled by Perverse Immortality EP up to this point. Subversions of the Psyche serves as the band’s first full-length effort.

Iniquitous Savagery, much like the name would imply, serve up a brutal dose of death metal. Good ole fashioned death metal, much like the ultra-brutal days of Cannibal Corpse, Disgorge, or early Deeds of Flesh. The first indicator of this is the super-low growls that take up almost all of the vocal performance. Things approach slam territory from time to time (see the title track) but never really go all in since the band ends up settling more for a mid-tempo groove or chug instead (“Propagating a Pestiferous Entity”). They also infuse a quasi-technical aspect to some of the riffing, though it never inhibits the more brutal nature of the album (see “Transient States of Metaphysical Revelation”). The problem is that everything is very ‘by the book.’ It’s a good, brutal time but there’s never any sense of surprise or creativity to be had from start to finish.

Subversions of the Psyche will please fans that cannot get their hands on enough brutal death metal, but that’s about it. It’s very clear that they have the writing chops to ape the style in every regard, but one has to hope that with future offerings the band will spread their wings so to speak. Otherwise the formulaic nature of the music won’t get the band far past the opening rounds.