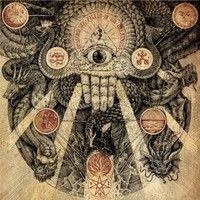 Since their previous release, Black Devotion, Czech black metallers Inferno have rekindled their music to a groundbreaking degree. With raw intonations, fast tempos, and a hint of harmonic instrumentals accompanied by atmospheric intros and outros, Inferno’s latest release Omniabsence Filled by His Greatness delivers a vintage underground sound that satisfies the hunger for hard and heavy without sacrificing clarity.

After nearly 20 years, Inferno can still be recognized by symbolic images portraying Paganism, Wiccan traditions, warfare, and Slavic history. Inferno creates their grim manifestations by wearing dark hooded cloaks, depicting death, and igniting pyro dispositions that illuminate a theme for the band in both image and song. This traditional representation of black metal renders as an essential for everything from moshing to spending an evening burning a candle on top of a skull.

Through Agonia Records, Inferno met with Tore Stjerna (guitarist, drummer, and/or producer of alike black metal bands including Watain, Ofermod, Ondskapt, and Valkyrja) at Necromorbus Studio to record, mix, master, and conjure the Omniabsence Filled by His Greatness. Considering the deviation of dynamics, it’s remarkable that this was not just Inferno’s sixth album, but also the second album from the triad Adramelech, Ska-gul, and Sarapis, with the addition of guest bass lines played by Beldaroh (Besatt) and O. (concert member of Inferno).

With songs like “The Firstborn from Murk” and “The Funereal of Existence,” Inferno shows that when it comes to composing black metal, the key is not necessarily the amount of band members but the natural talent of the musicians. Adramelech’s sonorous growls and wicked chants, Ska-gul’s transitions from melodic to intensive riffs, and the razor-sharp strokes of Sarapis’ drum sets ablaze a metal firestorm and an upheaval of Inferno’s work.