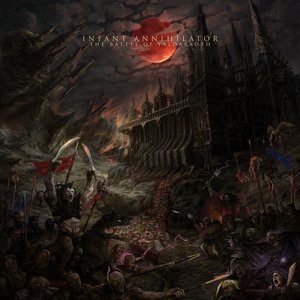 With Infant Annihilator’s last album, The Elysian Grandeval Galèriarch, they established themselves as going for absurdity and over-the-top chaos. Being extreme just for the sake of doing it, so to speak. The songs were mostly a mess of hyper-speed and technicality instead of functional songs. In short, it didn’t leave much of a lasting impression. While The Battle of Yaldabaoth may not cure all of their ills, it’s definitely a step in the right direction.

There’s still that initial impact that leaves a bludgeoning impression. The band can play at ludicrous speed with an emphasis on insane (and way over-the-top in the mix) drumming coupled with technical rhythms and Dickie Allen’s (also over-the-top in the mix) mix of different extreme vocal styles, and of course, mix it with some heavy breakdowns. Some of the tracks will do nothing less than knock you back with their levels of intensity. For that aspect, the band knows what it wants and can deliver. This time around, there does seem to be a taming of some of the absurdity – some elements of groove, and notable upticks in the writing process are evident when listening to any particular track. They feel more like songs than whirlwinds of musical chaos, and retain some higher levels of memorability. The two lengthy tracks (“The Kingdom Sitteth Lonely Beneath Thine Hollowed Heavens” and the title track) feel more fleshed out, and worthy of the extended time.

However, again at almost an hour in length, it’s simply too much. It all starts to blur together, which heavily couples with the super-loud blast beats that render riffs almost needless at times, and vocals, that while impressive, also take away from the musicality behind them. It’s meant to be over-the-top, but there’s a point at which things start to not be ‘funny’ so much as just boring. Infant Annihilator is clearly progressing towards some sort of middle ground, which elevates The Battle of Yaldabaoth, but not to the point where it’s really mandatory listening quite yet. 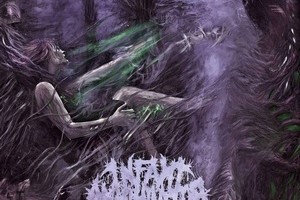