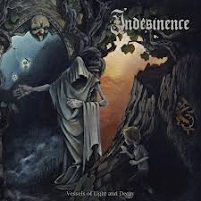 Positioned as yet another in a long line of United Kingdom-based doom hopefuls, Indesinence appear to have taken a page (or two) from Novembers’ Doom, a band who essentially modernized death/doom in North America. While the band’s UK locale suggests there will be plenty of milking of the Gothic,Serenades, Turn Loose the Swans teat, Indesinence keep it on the straight and narrow throughout the seven cuts that comprise of Vessels of Light and Decay, their sophomore outing.

The band’s 2001 formation doesn’t account for productivity, as there is only an EP and debut Noctambulism to show for themselves, but Vessels of Light and Decay has a clear sense of purpose to it, as those soot-filled early Paradise Lost riffs come to make opener “Paradigms” an instant winner, recalling an era when PL would turn their songs into labyrinthine affairs ala Shades of God. Indesinence proves to be a little more hard-nosed, though, forsaking any kind of melodic jaunts in favor of what mostly is a dry, desolate atmosphere.

The nods to Novembers’ Doom and their early output (think: Of Sculpted Ivy and Stone Flowers) find themselves numerous on “Fade (Further Beyond)” which basically death metal in slow-motion, just with a little more chill. “Communion” proves to be the song most emblematic of early 90’s death metal, totally ripe for a Death is Just the Beginning Compilation, while closer “Unveiled” emerges as the song without any semblance to the Holy Trinity of British doom, specifically Serenades-era Anathema.

Able to tread the line between funeral doom and retro death metal, Indesinence have turned in a relatively workmanlike platter with Vessels of Light and Decay. Naturally, just about anyone would be gung-ho for some direct kills on early My Dying Bride or Paradise Lost, but the Brits end up sounding more American than they probably should. Not necessarily a bad thing, of course, just happenstance when you’re from a region known for doom. 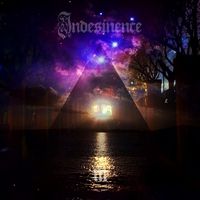