In Flames – Sounds Of A Playground Fading (Century Media Records) 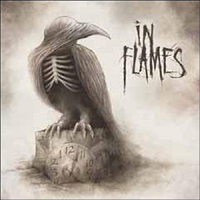 When a band blossoms into an international phenomenon, many of the early people who savor and nurture their every move leave the nest. Often these acts outgrow their initial underground appeal and commercialize their sound, to the detriment and disgust of their first fans. Sweden’s In Flames follow this blueprint to a T.

In the early 90’s, their twin harmonies and melodic death metal sound set the tone for future generations of musicians. Albums like The Jester Race andWhoracle won praise from critics and followers in all corners of the globe. Building a headlining following first in Europe and the Far East, they put in their share of opening slot and questionable touring conditions Stateside to attain this same level of sales and respect. We could sense a changing of the guard though with an emphasis on easier hooks and keyboards through efforts likeColony and Clayman.

And then Reroute To Remain signaled the bell toll into nu-metal influences, which has subsequently given In Flames a wider appeal at the expense of the old audience. Bigger tours with Ozzfest and modern metal acts. White jumpsuits. Interviews acknowledging their new-found American influences. As a result, I haven’t fully followed the band in the past eight years like I did in their earlier days. Which makes their tenth album Sounds of a Playground Fading all the more interesting.

The band can really do whatever it wants musically. On this 13 song platter, you’ll find odes to the past in the occasionally up-tempo thrash parts within “The Puzzle” and “Enter Tragedy” as well as the trademark twin harmonies throughout “A New Dawn.” Anders Friden takes his vocal knowledge up a notch in material like the mid-tempo groove shuffling “All For Me” and rhythmically addictive “Darker Times,” screaming and singing with clarity and conviction.

But overall the album seems to retain a sense of comfort in bridging the present with their overall discography. The hooks are sharp, the songs are tight and compact, and even some of the guitar solos and instrumentation has that “Pinball Map”-feel on a song like “Ropes” while the bulk of the rhythms and drum parts certainly have the easy to ingest/ modern metal movement appeal. I can’t seem to step away from the opening title track – one of the best riffs in the In Flames catalog to date, assuredly going to get audience participation when they tour for this.

Will we ever get another The Jester Race? No, but I believe In Flames are willing to spread their wings a little bit in the hopes that everyone can just focus on the music, instead of splitting hairs about their reasons for stylistic expansion. Maybe this is the third In Flames dimension – sans Jesper Stromblad – and only the consumers can determine whether to stick by or swim into other musical oceans.