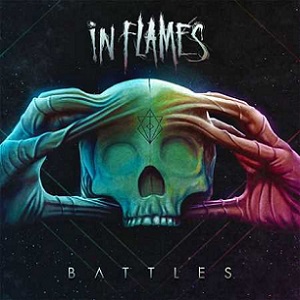 “Only for the Weak,” in its saccharine, bouncy glory—hereby copied by Omnium Gatherum on “Skyline,” but not quite on the same level—has proven to be In Flames’ Pandora Box. Prior (as in, before 2000), In Flames were the melodic death metal benchmark, rightfully considered to be band to carry underground metal through the ‘00s. But when synth-drenched, Euro-pop influences infiltrated the band’s sound, then the gradual deconstruction of the Swedes began. The 16-year unraveling continues on Battles, which if we’re to rank the post-Clayman In Flames albums, is probably a shorn Anders Friden dreadlock above 2014’s questionable Siren Charms.

While Friden has demonstrably improved as a singer (who could forget his unsightly warbles on Reroute to Remain?), the use of child-like choirs on several of these songs is quite the deterrent. In reality, it’s a group of early 20-somethings, but, in an effort to add new vocal dimensions to “The End,” “The Truth,” and “Before I Fall,” In Flames sounds rather puny, to be frank. Friden’s lyrics—forever a weak spot of his—don’t help matters either, making this scribe wonder aloud how much of an influence former co-lyricist Niklas Sundin (Dark Tranquillity) really was during the band’s glory days.

But, let’s call out In Flames for what they really are: A alternative metal band dressed up with ultra-sweet melodies. On occasion, they can pull one out (“Drained” is an admirable album opener), while other times the Swedes sound like they’re forcing themselves to be aggressive (“Through My Eyes”). Either way, Battles further pushes In Flames away from their core base while bringing them closer to the mainstream. With Dark Tranquillity and Soilwork operating at obscenely high levels, In Flames aren’t even in the same conversation. Not like they want to be anyway…