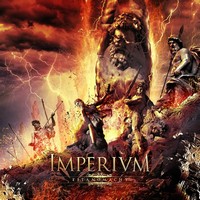 Imagine if Nile were British and wrote songs about Rome and Greece rather than Egypt. Congratulations, you now know what Imperium sound like!

All jokes aside, the new album Titanomachy by the UK deathsters positively reeks of Nile influences. This is not necessarily a bad thing, since Nile is a killer band. But of course, relying so heavily on a sound refined by another makes your creation seem a bit less original. Nevertheless, Imperium have put together a damn fine album here. Chock-full of technicality, brutality and even melody, this album is a blast to put on. And if you think of it as a kind of homage to Nile, well, I reckon it doesn’t really matter that their influences are worn on their sleeves.

Titanomachy takes the listener back to ancient Greece and the war of gods vs titans. It touches upon many of the characters and events in said mythology. Imperium makes use of this vast material to create a concept album that should appeal to history buffs as well as people who simply enjoy storytelling in their lyrics. The production is beyond excellent – to produce this brutality and still retain clarity is a feat in itself. And the skill of each musician is on par with the production, from the varied and intense growls of Doug Anderson (Unfathomable Ruination) to the barrage of riffs by band founder Mike Alexander. These two are the band’s only permanent members for the time being. Live shows thus seem to be out of the question, but hopefully Imperium can find session members since this music really deserves to be played and heard in a live setting.

Nile or no Nile, Imperium are a force to be reckoned with in their own right. Rising like titans they are bound to crush any resistance and take their rightful place as one of the leading technical death metal bands in the UK right now.