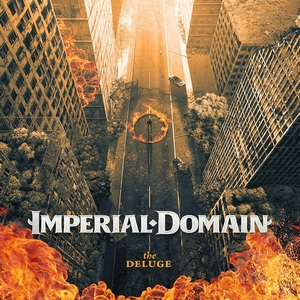 Swedish melodic death metal comes your way once again with Imperial Domain’s third release, The Deluge (fitting considering the deluge of new releases in the coming weeks). The band’s first release since 2003’s The Ordeal, the band has had to overcome some obstacles in their path for this third attempt, including the passing of vocalist Tobias von Heideman a few years back. The end result is as sturdy as they come as far as melodeath goes, but it never really extends its hand at anything beyond that.

That said, the strength of The Deluge surely lies within the songwriting itself. While it does feel like a product of the times from the late ‘90s/early 2000s melodic death metal movement (complete with an acoustic instrumental track in “Evanescent,” though thankfully without any ear-candy clean vocal choruses to be found), it doesn’t exactly sound like yet a throwback either. But the reliance on strong, catchy melodies and leadwork inside of each track does cater towards a similar feeling. Some tracks have a bit more bounce to them than others, such as the uplifting “Conspiracy” immediately coming to mind. They also play towards a more melancholic vibe with other tracks, notably “Eternal” and “Withdrawn from Life,” which contains some solid acoustic guitar as well. These glum tracks benefit from a growl that doesn’t feel aggressive so much as it does reflective, and Andreas Öman nails it. It’s really hard to argue with any of the tracks, either sorrow-filled or upbeat, due to the sheer amount of strong melodies to bring it through.

A pleasantly enjoyable release for those who can’t get enough melodic death metal in their lives, The Deluge hits all the necessary marks with charm. Though it is limited to that particular niche in terms of appeal, there’s no denying the well-written execution and passion of the material.