Imonolith – State of Being (Self-Released) 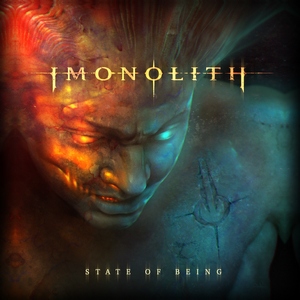 Considering the involvement of so many top tier musicians involved in Imonolith (RVP and Beav from Devin Townsend Project and Jon Howard of Threat Signal, among others), it’s easy to see why the modern metal community is anticipating the band’s debut. None of the band is interested in retreading any of their previous history, so it’s wise to go into State of Being not expecting it to sound like anything you’ve heard from the players involved.

That said, Imonolith does stick to a modern metal tone. It’s tough to really put a finger on the band’s sound outside of that, as some tracks swing towards an almost alternative metal vibe (“Hollow”) that focuses on big grooves and catchy melodic choruses while others (“The Reign”) have an almost wall-of-sound approach that’s vastly more aggressive. But given the changes in direction, things feel pretty consistent from beginning to end in that there’s no wild transitions or a feeling of being disjointed. This is where the songwriting capabilities are showcased, and utilizing some tracks that cover more of a middle ground, such as “Breathe” or “The Mourning,” where there’s still a strong sense of melody (and grooves) but also have a darker underbelly.

It’s also important to note that with the musicians in Imonolith, they can showcase some more technical stuff but it’s much more focused in providing what the song demands. Some of the heavier tracks have some impressive drumming from Van Poederooyan, but he is also more creative with how he plays through a more mid-paced track like “Becoming the Enemy” with more nuanced hits. Vocalist Jon Howard is also worth a quick mention, with his readily identifiable screams and clean vocals, something that aids in pulling up the heaviness or melody in a particular moment.

Those looking for something that knows how to groove hard, offer a catchy chorus, or knock you flat on your back over the course of an album will find State of Being to be an immersive listen. It’s a solid introduction to what Imonolith can do, and oozes some potential for those who dig modern metal.