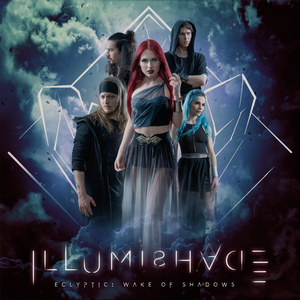 Rare is the album that can provide more than just a listen and instead provides an entire experience. There are layers to be absorbed, and the music itself is meant to take you into an entirely new world. Illumishade’s potent debut does exactly that. While it might not be something that you pick up on as much when listening to the released singles, which are thoroughly enjoyable in their own right, when listened to in one sitting, Eclyptic: Wake of Shadows is entirely breathtaking.

In an interesting premise, Eclyptic comes across as a heavy metal version of a musical of sorts. There are a number of instrumental tracks that give the album a sense of unity and flow, and allow the individual tracks to flex their muscle in a number of varied ways. There are some heavier tracks within the mix, with “Tales of Time” being the real springboard into the release, and features Eluveitie bandmate Chrigel Glanzmann guesting with some immediately identifiable roars, which of course pair quite well with Fabienne Erni’s vocals even in a more slightly symphonic setting than some will be used to. “Crystal Silence” carries a more upbeat tone and addictive nature to the melodies, which allows it to really pop out at the listener around the halfway mark. Later, the pulsing “Muse of Unknown Forces” carries with it some rumbling grooves and darker tones, and sets the stage for a powerful chorus that deftly balances the heavier tones with graceful and soaring melodies. The album ends with the sprawling epic, “World’s End,” which showcases itself as even more grandiose when you can take in the set-up with “Beyond the Obsidian Veil” before it begins, and hear everything gently fade away with “Glowing Tides” following it.

On the more gentle side of things, of which there are many, Illumishade really finds their footing. From the warm opening and serene guitarwork of Jonas Wolf in “Passage Through the Clouds,” the stage is set as the band slowly emerges into heavier waters with “The Calling Winds.” The one-two combo of “What Have I Become” and “Rise” is nothing short of dreamy. The former is so genuinely sweet that it sounds as if it could play alongside a romantic climax within a Disney film. “Rise” ups the heaviness a bit more, but Erni’s vocals keep that magical feeling within the track, alongside a show-stopping solo from Wolf later in the track. Lastly, “Golden Lands” may be the most ‘musical’ sounding track within the mix, with a gradual and pensive start that slow burns with wistful atmosphere and elegance.

As mentioned earlier, there’s a lot to digest in Eclyptic. The immediate draw will be that of Fabienne Erni’s vocals, displaying a range from melodic whimsy to powerful and charismatic depending on the track. There’s a warmth that she brings, even on the heavier tracks, that stays remarkably compelling. But, what really seals the deal is the instrumentation surrounding her. Given the musical-esque nature, there’s a lot of ebb and flow, and the world-building sound that goes into the orchestrations and instruments is what ultimately lets you escape into another world with the music. There are few bands that can execute ‘mood’ with the interludes as well as what Illumishade have done here on their first go-round. The way the tracks are tied together is thoroughly impressive, and they really add something to the music to give it a breath of life all to itself.

Eclyptic: Wake of Shadows is an album that is best taken in as a whole. Something worth setting aside 42 minutes of your time and fully investing in. There are some beautiful tracks here, but really focusing in on the music and letting it take you on a trip brings it to an entirely new level, and one that few current bands can really conjure up. There’s some heavy stuff for sure, but one big take-away is that Eclyptic is going to make you smile, a rare accomplishment in metal without resorting to saccharine tactics. In the end, Illumishade have crafted something that is magical, and dare it be said, blissful. It provides an experience that melodic fans will deeply treasure.