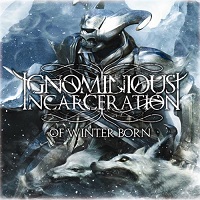 Less than three years old as a band, British death metal-heads Ignominious Incarceration are already unleashing their debut album through Earache. That sets the standard pretty high before the play button’s even been pressed, you’re already wondering what won the Earache folk over. Well wonder no more, stop wasting time and caress your ears with this delightful noise. Start at the beginning or pick a song at random (“Dynasty Damnation” comes highly recommended) – it’s all gold. Frozen, heavy, gold.

Despite their status as newcomers, Ignominious Incarceration (there’s a mouthful right there) have talent beyond their years and they really know how to display it. Where lesser bands might decide to chuck everything full blast at you these boys show some restraint. “In The Face Of Absolution” is a whirlwind, “Dynast Damnation” a building thunderhead cloaked in spiralling guitars and trigger-happy drums, later nipping in a flighty solo over what almost sounds like the Knight Rider theme tune. “Elegance In Aggression” starts off on a sliding time signature, Meshuggah-ish riff before slipping nicely into more familiar death territory, albeit one wrapped in cold winds. The clean production works tremendously in their favour, adding crispness to the proceedings and stopping the whole thing becoming swamped.

While their fellow countrymen and one time tour partners Trigger the Bloodshed batter you continuously about the head, I.I. are a little more subtle, it’s a sharp thud in the snow and then the slow drag back to camp, where inevitable death awaits cloaked in fur and flame. The title “Of Winter Born” in fact couldn’t be more apt. You can hear the ice, close your eyes and you can picture the fog clouding in front of their mouths, icicles forming on hair as they play. That coolness gives depth, which means you can observe properly, instead of having to squint through the usual flood of red.

Sure there’s a debt to their death metal forefathers in the shape of Deicide and to a lesser degree Death, even Hate Eternal are owed some gratitude, but there are also technical moments which Opeth at their heaviest would be proud of. The closest band you could probably compare Ignominious Incarceration to would be The Black Dahlia Murder. They both favour that clean sound, carrying everything clearly, making sure nothing remains buried. Hell, the title track has something of a Primordial tinge in sections, “Solitude” though remains a full frontal assault without resorting to stupidity or simplicity yet they simply refuse to be straightforward. Andy Wardle’s vocal delivery throughout is spectacular, the guitar work between Steve Brown and Danny Guy intricate, yet never flashy, the drums and bass simply refusing to come to the fore, remaining at the core holding I.I. together.

Of Winter Born is of course not the ultimate death metal album (that was the last Bloodbath record), but by Christ, it’s not too far behind. Thoroughly modern, they never descend to the deathcore level which has claimed so many others. This is not just a great album because of the relative youth of its creators; it’s a great album regardless.