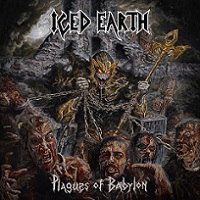 Hey, Iced Earth Stu Block doesn’t sound like Into Eternity Stu Block. Into Eternity Stu Block did whatever he wanted (remember his rafter scaling on “Timeless Winter?”); Iced Earth Stu Block stays in the Barlow Zone, or some other nondescript operating area that has effectively zapped whatever character the man had in his voice. It’s like Block had to conform to Iced Earth, not the other way around, which unfortunately, does makes sense – the band has been going for quite some time, with Plagues of Babylon emerging as their 11th album, and second overall with Block on the mic.

Little going on in terms of new musical territory for IE. Main honcho Jon Schaffer is still boxed in the gallop/crunch-a-ton netherworld, so there’s a bit of a replay on previous musical ideas (see: “The Culling” and ballad “If I Could See You”). As tried-and-tested as these ideas are, they still carry some deferred weight; maybe it comes on the anthemic “Democide,” or the harmony-happy “The End?,” who really can break the difference at this juncture, ya know?

Block, though, never has the album-stealing moments he’s capable of. Bear in mind that this doesn’t require the Canadian to do some falsetto or brandish a flurry of harmonies, but his vocal choices are arbitrarily, pretty safe. The Euro die-hards might have a go with “Among the Living Dead” (another song about zombies? Sheesh.) or “Spirit of the Times,” which coincidentally, is a Sons of Liberty song, Schaffer’s side-project. Regardless, this “settling” into the Iced Earth vocalist role has come at the expense of the man’s individuality, a stark contrast to his time in Into Eternity, where he virtually ran wild.

The notion that Iced Earth has been rejuvenated by Block could not be more correct, but the band as a creative entity, sounds almost flat. Then again, the European metal crowd would hate it if the band were to change, and IE is a long-established force here in the States, so why bother? Plagues of Babylon is workmanlike…and not really in a good way.