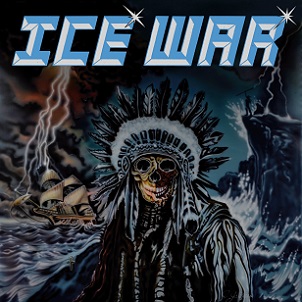 On the surface, Canada’s Ice War’s self-titled debut full-length is somewhat juvenile. Take a crack at the cover, the production and the rough, ragged vocals of sole dude Jo Capitalicide and you’ll figure out why pretty quickly. But, this type of “no metal before 1989, please” has its merits; you know, fist-banging cuts that are a quasi-call-to-arms, the tunes played to the point where any normal denim denizen can think they too can pick up a guitar, learn to keep time on a rickety drum kit and write an album. That’s why Ice War will succeed.

Taking all sorts of pages and cues from NWOBHM and traditional metal, Ice War, er Capitalicide, often find themselves boxed in via 4/4 signatures and utterly basic arrangements. While Capitalicide has a tendency to over-sing (read: he should give his tunes more space), he’s capable of digging up a quality chorus or two, like on “Dream Whip” and the rag-tag “Slavers Whip,” which wouldn’t be out reach for Manowar circa 1984. Beyond that, the man’s guitar playing, which again, is a few pegs below standard, carries a degree of simplicity and catchiness that allows these songs to stay afloat, even if some questionable vocal cadences and patterns are afoot on opener “Battle Zone” and “Reverence of Gold,” in particular.

Shadow Kingdom and Italy’s Cruz Del Sur Music have a tendency to pick up bands like Ice War, outfits who are true-to-the-core and wouldn’t have the slightest idea of what’s happening in the current world of metal. It only works in these kind of instances, though. Ice War, for its inability to do anything remarkable, has turned in an album with class, character and might. True metal qualities to forever abide by.