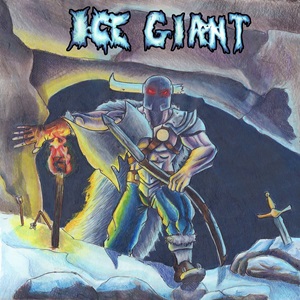 Cave dwellers Ice Giant came out into the light in late 2015, developing a sound that traverses power/progressive metal with nuances of thrash and extreme metal at the core on their self-titled debut full-length. Hailing from a healthy Massachusetts heavy scene, it’s not surprising that these newcomers possess versatility within their songwriting – it can’t be easy in today’s flooded marketplace to distinguish oneself from the host of acts plying for attention without a distinct image or melding of music for differentiation. Trouble is – if you don’t take your time smoothing things out, the results could make for a bumpy aural ride.

Possessing three vocalists in guitarists Nick Gallop and Tom Labednick plus bassist Eduardo Casella allows for multiple clean, extreme, and unison harmony possibilities – which works to their advantage for sing-a-long/bard moments a la Blind Guardian during choruses and specific sections of cuts like “Tale of Rawonam” and quick hitting opener “At Tyranny’s End”. Expect guitar runs that align well to Teutonic power and Scandinavian extreme followers, with rhythm section work that can be very straightforward one minute, progressive and/or blasting the next. Nick and Tom excel in the lead break department, developing ideas that can be melodic, catchy, and shred-tastic if need be – check out “The Tower” and closer “The Sentinel” for cultural attachments that bring up everything from Iron Maiden and Iced Earth to even Amon Amarth or Children of Bodom.

Many of the issues for full appreciation of the contents relates more to doing too much at one time in certain songs – whether it be a weaker main melody line for the verses in “Dimension of the Damned” or the out-of-tune clean passages that followed up some extreme vocals in the otherwise tribal, mid-tempo “Wrath of Justice”. It’s one thing to diversify for originality’s sake – but if you can’t pull off the baritone Falconer-ish parts, it may be time for more coaching or abandoning that all together and sticking to your strengths. Given the infancy of the band’s career, Ice Giant have plenty of time to hone in on a focused style – which should happen as live seasoning and natural songwriting experience takes shape.

The potential present keeps Ice Giant on the radar screen for the future – for now, this self-titled album represents a band still feeling its way in terms of direction and songwriting, so it could be exciting to see how the next product turns out.