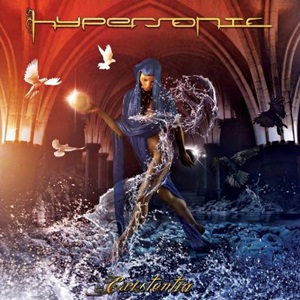 Tell-tale sign we have an overseas artist on display – the imaginative, Latin-language twist for an album title. Italian symphonic power metal act Hypersonic have been in ‘existence’ since 2006 – slowly working on their craft through demo, EP, and single releases before their Underground Symphony debut record Fallen Melodies came out in 2011. Signing a fresh deal with Revalve Records, the follow up Existentia establishes a conceptual theme regarding the spiritual affairs of the afterlife in relation to man’s actuality on this planet Earth. Beats talking about slaying dragons or other fantasy/mythology subject matter, eh?

The quintet presents an uplifting power sound where keyboards play as prominent a role as the guitars – using a platform that put artists like Sonata Arctica, Stratovarius, and Labyrinth on the landscape during the 1990’s and early 2000’s. A nice touch to differentiate themselves from the norm is the bass solo break through the fluid fingers of Francesco Caruso during the instrumental section of “Living in the Light” – which also contains a vocal duet guest appearance from ReinXeed guitarist Tommy Johansson. The band members understand dynamics are key in propelling an ambitious recording where you hope to keep listener interest as the story plays out – the heavier, almost progressive roller coaster “Love Is Pain” works well because of the growling background elements and drummer Salvo Grasso’s shifts between triplet hits, double bass speed, and solid metal groove all in a tight 4:16 window. Those who love the straight power, uplifting melodies, and keyboard/guitar syncopation will dig “The Eyes of the Wolf” (featuring ex-Vision Divine vocalist Michele Luppi) and “God’s Justice” for sure, Alessia Rapisarda as the main singer easily able to glide in multi-octave splendor and rival many of her symphonic heroes a la Tarja Turunen or Sharon den Adel.

At 12 songs and 70 minutes, Existentia does occasionally extend itself a little too far in set up/prolonged sections, especially towards the latter half which can make the almost ten-minute closer “The Meaning of … (…Existence)” challenging to full consume. Five years between records doesn’t necessarily mean pack every minute of the CD format- even in a concept format. In the end, Hypersonic are adept at their preferred style – serving up a delectable record with variance and passion, and many will jump on the cause for those reasons alone.