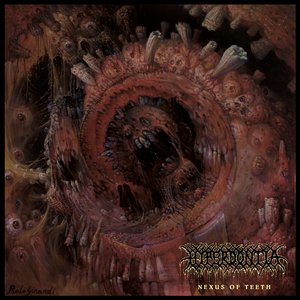 Despite having a pretty good idea of what hyperdontia was (an excess of teeth), it did lead to a pretty disturbing Google image search of the term. The musicians of Hyperdontia hail from both the Turkish and Danish scenes, and while the music itself hits that murky and disturbing feel, it ultimately feels familiar in tone.

Based on the labyrinthine and delightfully creepy artwork, you might be inclined to think of Hyperdontia as playing towards that cavernous, Incantation-y death metal that’s all the rage at the moment. And you’d be right. Nexus of Teeth bathes just about equally in the waters of Incantation and Morbid Angel, giving them a very clear direction that fits the ‘90s aesthetic. The intricate and bizarre guitar riffing style of Morbid Angel is nailed down to a science over the course of the album, complete with all of the filth and gritty nature of the times that Incantation reveled in. The low, guttural and inhuman roars also sink in as a nice touch even if its par for the course. Things range, unsurprisingly, from the slower dirges (see “Majesty”) to more blast-friendly tunes such as “Teeth and Nails,” but it’s hard to argue when the band has this particular branch of music so well done. That’s ultimately why Nexus of Teeth is successful. The enthusiasm behind it is clamoring, even if it fails to harbor much originality.

Some will state that Hyperdontia are simply the latest band to jump onboard the old school death metal train, and while they aren’t wrong, they have gotten A’s on all of the components. Those will an affinity for this type of material are bound to view Nexus of Teeth as the next big thing, and quite frankly, that’s all that really matters in the end.