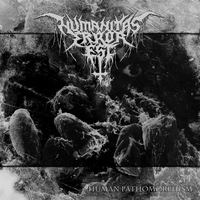 With black metal being the current diversifying genre that it is, far more often today we hear bands that are incorporating new elements, melodies, or atmosphere into the mix. But what of those who still want to hear something that is primal and completely sinister in nature? Humanitas Error Est has you covered in this regard.

Cut from the same cloth as full-speed ahead, brutal black metal bands such as Dark Funeral or Marduk, Human Pathomorphism has one thought in mind: total destruction. The intro, “Destroyer of Worlds,” builds up a war march that “Quod Homo Appellatur Morbus Est” quickly accelerates to maximum velocity. From there, most of the tracks follow this similar level of intensity. When the band isn’t blasting away full-throttle, there are some death metal elements that are involved, enhancing the brutality. Along with this, the vocals often switch between a rather upfront and intense black metal rasp to some lower guttural roars. The type of album that gives you no quarter, don’t expect any ethereal atmosphere or flashy melodies – but every once in a while you can find some subtle ones, such as the slowdown during “Raping Religions” or the gradual build up to the album’s longest track, “One Piece Human.”

There’s no denying the frenetic rush that Humanitas Error Est provide on Human Pathomorphism. Razor sharp riffing and a visceral wall of sound provide the band with ample support to keep the proceedings interesting from beginning to end, which is a strong suit for the band considering the number of bands that cannot sustain this level of intensity and keep things fresh. Barbaric, yet solid musically.