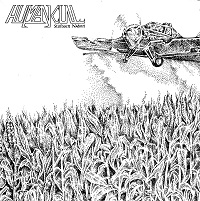 Because of their frequent dalliances with death metal, Napalm Death hasn’t been the U.K.’s preeminent grind outfit for quite some time, opening up a sizable hole to be filled by whatever crusty-bunch who want the job. (Do crusty grind dudes have jobs?) The fundamental issue, though, is that creatively, grind can’t expend much more than it already has; it’s all a variation of a theme. Therefore, such a thought presents itself more than a few times across the 23 tracks that make up the 25 minutes that is Human Cull’s Stillborn Nation.

Predictably, the run of the lot consists of lots of one-minute songs, and one five-minute cut. Generally, song lengths are hardly a discussion point – they’re moot most of the time, yet in the grind spectrum, they’re of value only because it gives the band in question an easy way to dump one or two ideas into a “song,” then be done. Essentially, this is what Human Cull does. They prove to be adept at fermenting some punk/death-crossed riffs on “Global Furnace” or “Entombed by Progress,” occasionally wrapping into a groove on the title track as well. However, these jams are on the short of the stick; they’re quick blasts, mildly off-the-rails in spots, and sludgy in others, yet it’s not until the closing number “Echoing Silence” where cohesive ideas are pieced together. The rest of the album feels…piecemeal.

Nevertheless, Stillborn Nation doesn’t have much charm to it; it’s a pretty threadbare offering, suggesting that the band would be advised to head back to the ‘ole drawing board, or at least look at what other countries are doing to make grind work. Not exactly the grind void-filler it could have been.