Howls of Ebb – Cursus Impasse: The Pendlomic Vows (I, Voidhanger) 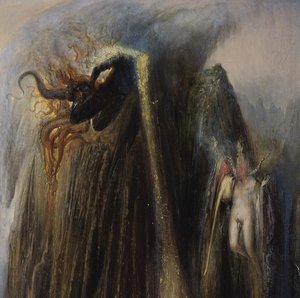 Having been around on this giant mud ball long enough, I’ve been fortunate to hear how metal has expanded over the decades and am appreciative of its progression in various forms. Bands need to push boundaries just like some need to be status quo, it’s just the law of averages. So that brings me to the recent release from Howls of Ebb-Cursus Impasse: The Pendlomic Vows by the excellent I, Voidhanger Records. Howls of Ebb create a cacophonous racket hell bent on unearthing something other worldly nightmare thru their blended mind fuck or extreme metal with their sound landing somewhere between black metal and ambient night terror.

Treading the same artistic ground of Portal, Deathspell Omega and the like I give Cursus Impasse points for its creativity, as it has that in spades. If John Zorn played black metal thru a busted speaker cabinet while high on acid, you may get what Howls of Ebb are throwing at you, but if not, woe betide your ears, as the end product is quite rough. The guitar mix on CI is not easy going. I understand Howls of Ebb are attempting to give their music a raw edge, but to my ears it just sounds unprofessional (especially at this day and age when home recording isn’t really an issue) and does not mesh well with the other instrumentation. The riffs are dissonant and angular, but don’t really progress anywhere thru their expansion that makes the meld of improvisation and jazzed out psychedelic-crawl rewarding.

To put it bluntly, I found Cursus Impasse to be over all unsatisfying. I never thought I would reach an age where I say this, but I simply just don’t “get it”. I know there are components here that I find interesting but as a whole I just found little cohesion in the mire or chaos. To be fair, I suggest everyone to personally listen to this album to make their own opinion about it (as you should with anything!), but Cursus Impasse did not leave a lasting impression on me.