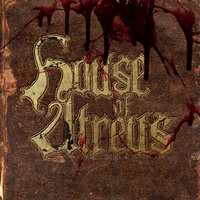 Some labels just seem to get that golden seal of approval. One of the labels with that Midas Touch for a few years now is that of Dark Descent Records, particularly in the realm of extreme metal. There’s been a ton of consistently great albums, including Corpsessed, Horrendous, and Thantifaxath within the last year alone. House of Atreus, sonically-speaking, doesn’t really fit in any of the catagories of the band listed above, but does it still reach the gold standard?

Without trying to attach a stigma to the band, House of Atreus seems to have more similarities to melodic death metal than any other subgenre. Don’t mistake melodic death metal as a bunch of sung choruses though, because you’ll find none here. This harkens back to the heavier side (aka the older side) of the subgenre, with a focus on more vicious riffing to accompany some catchy melodies. There’s a certain Amon Amarth feel to the music of The Spear and the Ichor That Follows, in terms of composition. There’s also a more war-mongering approach to the riffs, not going so far as the more oppressive bands such as Diocletian, but they nicely adhere to the Greek battle themes of the lyrics. Tracks like “Beasts of Antiquity” and “Throne of Chariots” are sure to get the fists a-pumping in the live venue, with just the right mix of aggression and melody.

While some might argue that if you’ve spent any time in the metal genre, you’ve undoubtedly heard The Spear and the Ichor That Follows before, there is plenty that it does right. The emphasis on heavy-hitting melodic riffs is always one that will find bands success (again, see Amon Amarth), and House of Atreus should be no exception to this. Their sophomore effort should lead to even great bounty if they play their cards right.