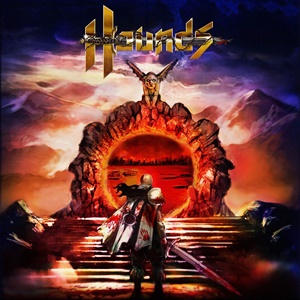 Together since 2016, Hounds are a heavy/power metal act with the spirit of 70’s/80’s influence coursing through their veins on this album Warrior of Sun. The quintet possesses a twin guitar and keyboard attack, filling the sonic landscape with an epic atmosphere that can be anthem-based as well as shaping up cultural/marching strains that convey the strength and might of soldiers preparing for battle. As the nine tracks unfold, evidence suggests influence from an equal US/European perspective, tee-totaling between bombast, bravado, and heads down riffs that contain magical and mystical atmosphere under the heavy metal context.

The classical-laden piano and supplementary twin guitar riffs and harmony exploration allows Hounds to develop ideas and flesh them out into grand aural arrangements – as “Beyond the Horizon” illustrates through some Rainbow-esque flair against Virgin Steele-ish bright baroque flourishes. Marco De Fabianis gets his own instrumental spotlight for the 2:03 “The Chronogate”, incorporating straight piano and swirling synths to create this imaginative, outer universe feel. When the band chooses to take things down a notch and explore calmer, restrained musical components, we get the eight-minute plus “The Light”, a composition where early Judas Priest textures give chase to Savatage-esque theatrical charm, the movement building through intensity and energetic lead breaks before turning on a dime into more serene, cinematic tension. The struggle for full recommendation of Hounds lies at the warbly vocal range of guitarist Massimo Ventura. He can be hoarse, strained, and slightly out of key, even when he tries to hit some David Defeis-style howl highs during the title track. No matter how good the music may be, some of his out of key melodies or rough around the edge screams will cause many fence sitters to go running for another band.

If Hounds could secure stronger vocal support, they have the right musical tools and abilities to gain credibility with fans of the above-mentioned bands. Until then though, Warrior of Sun sits in that murky, middle of the road land where you’ll have to tolerate what’s weaker to siphon out the power/heavy metal hooks and sophistication that does exist within.