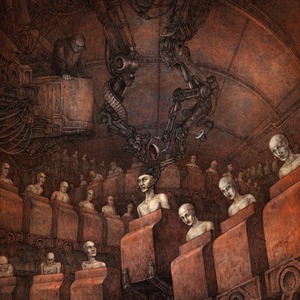 Lavadome Productions isn’t an incredibly prolific label, but it’s certainly a winner in the case of quality over quantity. The latest release from the label is a split release from two death metal acts Horror God and Techne. Both having a degree of mystique to their sound, and bringing their approach into two different, yet unsettling directions.

Up first is Horror God, who aim to capture the dissonant death metal fanbase with their take on the genre. It’s as grimy and murky as you’d like it to be, but never feels muddled. Taking some inspiration from bands like Morbid Angel and Immolation as well, they observe an Ulcerate-esque dissonance while still managing to create some real banging tunes that you can grasp immediately at the surface level. Thick and chunky riffs reign supreme (see “We Are”), having such weight as to pull you down with them as you listen. There’s an eerie sense when they slow things down to a crawl (“Dust”), but they can turn around and blast if required. It’s crisp and relatively clear for the style, which also aids with the delivery of it all. It can be dense and technical, but never overwhelming.

Techne takes the last four songs for themselves, and offer a more chilling and atmospheric approach to their death metal. The feel can be quite brooding and dark, and there’s still some room for melodies to creep in through the cracks without feeling forced (there’s even some clean vocal usage, though nothing that resembles anything remotely poppy). Otherworldly melodies are the highlight, and some occasional acoustic/clean guitar shine through (“Breathe”). But they can still rip with the best of them from time to time, as the more sprawling 7-minute “Conviction” shows by shifting between spooky blasting segments and more macabre mid-paced riffing. Final track “Finita la Commedia” stands tall due to an abundance of slithering melodies (some with an eastern flair) and dark ambience, creating a creepy yet enticing vibe.

A real winner of an EP from Horror God and Techne. No matter your taste in extremity, there’s something that should grab you, particularly those that want something more outside the box. Two bands that deserve to be on your ‘get to know’ list. 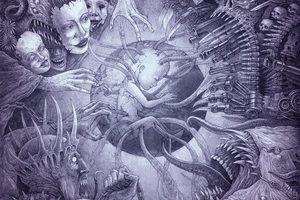