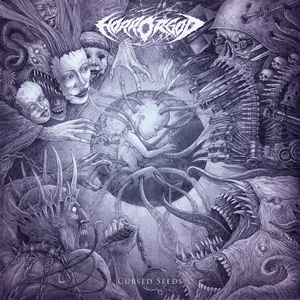 After being introduced to Horror God two years ago due to a split with Techne, Horror God (and Lavadome Productions, for that matter) is back with a full-length release. Lavadome is one of the few names in the death metal community that brims over the top with quality, and this second release with Horror God speaks also to the band’s quality. Cursed Seeds shows growth for the dissonant death metal squad that deserved notice.

The basics that defined Horror God’s part of their split is still quite present. Dissonant death metal with some nods to acts like Ulcerate, Morbid Angel, and Immolation are all in tow, but the more original part of the act is how they deal with atmosphere. While they can be absolutely suffocating in heaviness and churning death metal riffage (as the closer “Throne” showcases), there’s a certain bleakness and dark tone that this sort of material doesn’t quite reach. The techy stuff of today is there, as you can hear through the riffage (not to mention the top notch drumming), but it is still bulging with brutality. It’s a tough combination to grab onto, but Horror God has it. Then, when the band switches gears from brutality into atmosphere, there bleakness remains, along with some occasional sorrow and gloom (see “Face of War”). It gives the band a more multi-faceted approach to the music, and the atmosphere gives it a more gripping tone, even at heavier moments (see “They Were Behind the Barbed Wire”). It’s eerie and otherworldly, in all the right ways.

Cursed Seeds stays compelling through savage speed runs, moments of groove, and creepy atmosphere. A palpable sense of dread and unease couples well with the gloom/devastation vibes and gives the listener much to dissect. A potent release for lovers of dissonant death. 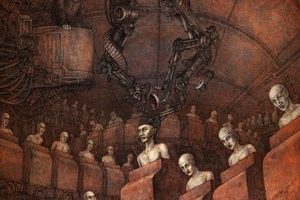