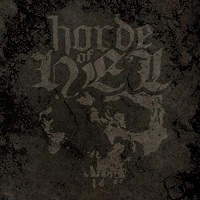 Comprised of members of the Swedish black metal scene (we’re guessing at least someone from Marduk is in this band), Horde of Hel’s industrial BM leanings are without the over-produced and futuristic vibe that usually permeates this tiny niche. Rather, it’s more vitriolic and primal, relying heavily on samples, pounding guitars and mid-level production values, none of which can rescue Blodskam from going the milquetoast route.

If the aesthetic behind Horde of Hel (human atrocities, evil, blah, blah) are meant to overshadow the music, than so be it. Most of Blodskam just skirts the drab dribble that oftentimes buries industrial black metal. And while the thrust of “Born Again Into Submission” and feral attack of “Living Abomination” are good and just, there’s nothing that gives off the sinister or charismatic vibe the band projects.

Watain, these fellas are not, Horde of Hel and Blodskam has the proverbial “all bark, no bite” slant to it. Thanks to the convoluted, oftentimes too varied approach, Horde of Hel might not find a great deal

of suitors in the black metal realm. And, can anyone else guess who’s in this band? We’re stumped…