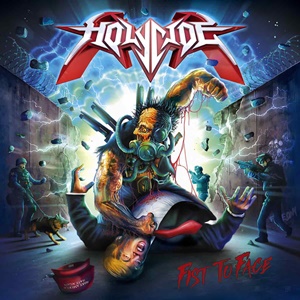 Starting back in 2004 when Xtreem Music founder Dave Rotten felt the need to develop a thrash band, Holycide expressed the intensity of the movement while leaving commercial aspirations to the side. Going through some lineup changes and hibernation events, the first demo No Escape came out in 2013, followed by the Toxic Mutation EP in 2015. Finally recording a full-length in 2017 with Annihilate…Then Ask!, the band would share the stage across Spain with bands like Flotsam and Jetsam, Onslaught, D.R.I., Helstar, and God Dethroned to name a few. The follow-up record Fist to Face showcase the quintet’s latest set of originals plus a Recipients of Death cover to showcase their affinity for the original underground thrash scene of the late 80’s/early 90’s.

Choosing to intro the album with Donald Trump rally speech sound clips for the 92 second “Intrump”, the cover art with its post-apocalyptic portrayal of Trump being overtaken by a militant monster leaves little to the imagination for what these gentlemen think of the current U.S. political climate. Musically the group go for a balls to the wall, attacking approach – the riffs speedy and ripping, the vocals equally vicious, while the transitions feature plenty of gallops and energy, the gang background vocals giving the listener brief injections of call and response catchiness. The slicing and dicing rhythms and crunchy riffs that Miguel Bárez and Salva Esteban employ resonate well with followers of Dark Angel, Slayer, and Sacrifice to name a few – check out “Empty Cyber Life” and “Innocent Hate” for the swarming killer nature to their stacking of chord progressions and nifty melodic runs against the fierce aural activities. When the band chooses to be slightly more mid-tempo in atmosphere with “Vultures”, they do not forsake some musical intricacies and speedier semi-blasting measures just for diversities sake. Dave’s vocals have a raspy, venomous aspect that put them more in a Coroner or early Sacrifice corner than your typical Chuck Billy or Joey Belladonna angle – capable to handle the speedy charge of “Nuclear Fallout” or a slightly groove-oriented, Forbidden-ish “Napalm Sweet Napalm” while keeping things firmly in the potent thrash platform.

Many may not remember the Wild Rags band Recipients of Death, who released two EP’s in 1988 and 1990, but the band pay tribute to this California act by covering “The Aftermath”, and it’s a blistering rendition that rivals classic Dark Angel for intensity and drop on a dime riff transitions without going off the rails. Outside of an occasional lackluster ‘sprinkler system’ style kick drum tone, Fist to Face will probably appeal to the underground thrash hordes most, as this will rack bodies with sweat and leave you bruised and battered.