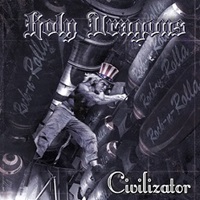 Together since 1992 from Kazakhstan (former Soviet Union republic, Central Asian country for those who need a world geography/history perspective), Holy Dragons prefer to keep their brand of classic heavy metal firmly entrenched in the German and British influence tree on their latest album Civilizator. Recording a mixture of English and native language material in these 24 years, I’ve only been privy to the last two full-lengths which showcased the good (Zerstörer more on the power/speed tip) as well as the bad (Dragon Inferno contains off-kilter singing and industrial-style drum overtones).

The short acoustic propelled instrumental “The Long Earth” brings tender Blind Guardian moments up, but for the most part this particular album explores a lot of straight forward classic metal riffs, harmonies, and hooks. Judas Priest, Iron Maiden and other NWOBHM-oriented artists are the jet-burning fuel to Holy Dragons catchy, anthem-oriented material – throwing in occasional bass leads for “Hawker Hurricane” while dangerously borrowing for “Emptiness (My Void)” a key riff in Metal Church’s epic “Anthems to the Estranged”. The closer “Stop the War” turns on the Dragonforce speed /power tempo afterburners, as Alexander ‘Demoraivola’ Kuligin soars in a James Rivera meets Bruce Dickinson delivery to the sky.

Given a chance to call the shots if this scribe were a producer, Civilizator would be trimmed down from its 69 minute playing time by a good third. Many of the instrumental sections in the 6-8 minute plus tracks like “My Fear (Litany)” or “No Oil…No War” contain simplistic ideas that should subscribe to a less is more philosophy, and the addition of vocal effects during most of the verses and chorus for “Through the Walls of Lies” distracts and borders on annoyance to the listening experience. Beyond the fact that the drum tones may be human driven, but sound suspiciously programmed or straight out of the Turbo/Judas Priest-era of the 1980’s.

Holy Dragons appear to be a unit that flexes its style record to record, which can be intriguing for some and frustrating for others. Civilizator has the fire and passion for the 80’s – it just could have been so much more with a stronger drum sound and shorter, tighter songwriting.