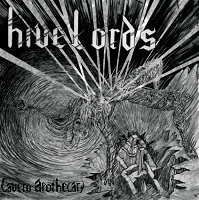 A bunch of long-hairs playing blackened sludge. That’s what Philadelphia’s Hivelords are. As if we’ve gotten enough of this sort of the thing the last 18 months, it’s no longer worth harping about; you just have to plop the darn thing on, and root around for moments of interest. Cavern Apothecary is the band’s debut full-length, five songs of careening, slushy sludge that takes the occasional gander at North American black metal, only to remind itself that rolling around in the distortion doom pigpen is apparently, the place to be.

The cuts here are long, almost predictably so. Such lengths give bands like Hivelords the opportunity to run riffs ragged, as if to see how dirge-like they can sound without getting monotonous. But alas, not getting sucked into the absent drawl of the eight minutes and counting title track is about as much of an achievement as finding the root of the song. Even after the first rip-roar of “Antennae Manifest” takes form, it’s just more of the now usual piggybacking off old Grief and early Southern Lord Records riffs.

The black metal shrieks have a tone of desperation to them, though, which is perhaps the most identifiable item in what is a dingy, doomy affair that will only find its legs with the already wobbled, disoriented crowd who perk up when a blast beat happens (see: “The Growing Overwhelm”), but don’t care for much else other than the fact sludge and black metal have had a play date.