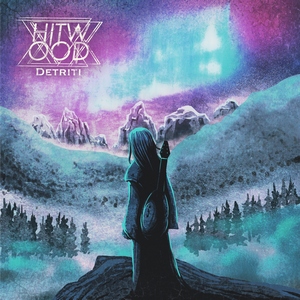 Italian melodic death metal unit Hitwood have been doing things instrumentally for the past 10 years. But for this release, things have taken a bit of a turn and vocals have been added for the first time. So where does this put the Antonio Boccellari-led band? Squarely in melodeath territory, but with a few more interesting and novel things happening in the background.

The band itself described as taking influence from both melodeath and post-metal/shoegaze, you are given a sound that can take the upbeat deathly portions and merge them with more atmospheric and sullen emotions that don’t usually enter the genre. The merger is pretty successful for the most part – the melodic death riffing being the main entry into the songs (with the exception of instrumental “More Winters to Face”) and the post-elements don’t have to slow things down in order to be effective. You can hear them moving about the background of tracks like “Chromatic” as ways to further engage the listener into the atmosphere of the song. It’s like a little emotive boost that enters the songs without diluting the melodies (which themselves are one of the album’s true strengths) nor the heaviness. The thunder of acts like Arch Enemy coupled with an embrace of post-metal. The vocals (a duty shared by Carlos Timaure and Eveline Schmidiger, depending on the track) are about what you’d expect from the genre, but play their role no less effectively.

A band that’s been lurking in the underground for some time, it appears that Hitwood is beginning to bloom with Detriti. The post- aspects are intriguing, and give Hitwood some leverage to stay in their own style (rather than being the genre-standard). Definitely worth investigating if you enjoy melodic death metal, even at only 26-minutes.