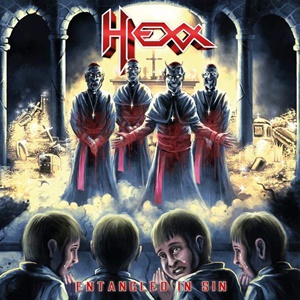 Early purveyors in the Bay Area speed/power metal movement during the No Escape/Under the Spell discography of 1984-86, Hexx would mutate into a death metal style for two EP’s and the Morbid Reality album from 1991. Resurrecting after a prolonged absence from the scene in 2013, Entangled in Sin is their fifth studio full-length – with guitarist Dan Watson and drummer John Shafer the last members from those beginning years still active with the group. Choosing to stick with more of their power/thrash style from the 1980’s, we get ten original tracks plus a couple of bonus songs from their early days re-recorded with their current lineup.

The riffs and songwriting template is US power metal-based, traditional to exotic-flavored chord progressions that keep the proceedings at a mid-tempo to slightly galloping pace, plus lead breaks and vocals that have a bit of a heroic edge. Dan Watson and Bob Wright as an axe duo deliver crisp, headbanging parts with the right harmonic support and trade-off mechanics, keeping “Vultures Gather Round” and “Internal Enemy” top of mind, especially for those who miss the spark of strong Judas Priest/Iron Maiden interplay against say the stature of Metal Church. The tones from the rhythm section, guitars and vocals of Eddy Vega also contain that old school flavor. You don’t necessarily feel as much modern, digital clipping or compression when taking in the bluesy licks, strong snare hits, and pumping bass, making “Beautiful Lies” and the Metallica-like “Touch of the Creature” fist-waving numbers, the latter sure to raise adrenaline levels through the roof. Eddy as a singer has a gritty nature to some of his high-pitched screams, but a conventional and smooth aspect to his mid-range that fits in with a lot of older singers (David Wayne and Rob Halford in spots) – it’s serviceable, but won’t necessarily elevate Hexx to the upper echelon in their genre. Some of the nursery-rhyme style melodies and ‘drinking/porn’ lines to the title track as well seem a tad cheesy and juvenile for a long-running band, almost like an Anvil afterthought.

“Night of Pain” and “Terror” return from 1984’s No Escape record, garnering decent respect for holding up well 36 years later. Entangled in Sin as a record is a solid representation of early Bay Area power/thrash, probably best served for the old-timers.