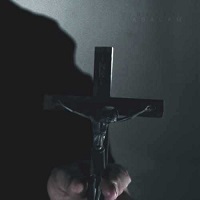 The grimy world of blackened grind/hardcore/whatever and its steady rise to underground prominence is fascinating. The bleak world the music often portrays is a fitting portrait of both common everyday realities (well, for many, anyway) and the dismal outlook metal has often portrayed. Enter Danish quintet Hexis and their mighty dark (and sweet as hell) debut Abalam. Occupying a space somewhere between Nails and The Secret, Abalam is a manic, crucible-by-nuclear-fire kind of listen, most of its 13 tracks weighing in at two minutes or less and wasting not a single one of those seconds to absolutely blow your mind apart.

Spin the wheel and choose any of the many tracks available here and you’ll find yourself involved in a firestorm of blackened aesthetics and scorched-earth sonic terrorism (from the looks of it, most unequivocally aimed at the world of faith). Late album standout “Exhausit” feels almost like a bruising epic with its three minute run time and blistering flavor. Elsewhere “Desolatum” and “Tenebris” are blink-and-you’ll-miss-it forays into every kind of abyss, unrelenting as much as they are harrowing.

Of course there are times when some of the tracks tend to blend together, but that’s a staple of this genre and, given this album in particular, likely on purpose to suit the suffocating mood. Not an album I was expected to be so taken with, especially this early in the year, Hexis has a winner and a half on their hands here in Abalam. For what appears to be something that has been long-churning given the band’s previous string of splits and EPs, this is the surefire work of a nascent band coming out of the gates swinging without remorse.

And throughout its many blackened depths, the trip is fucking awesome.