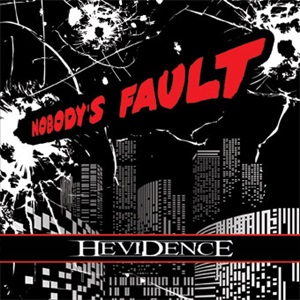 Hedging bets on the quality of a relatively new act based on previous success, Hevidence is the brainchild of guitarist Diego Reali – an Italian musician most known for his decade’s work in the progressive metal band DGM. Ready to get back on the metal saddle after dabbling in alternate genres, Nobody’s Fault features an intriguing mixture of older melodic hard rock influences against neo-classical power metal passion and output. Filling out the lineup is fellow DGM bassist Andrea Arcangeli along with the latest members, drummer Emiliano Bonini and vocalist Corrado Quoiani – and after a few spins you get the idea that Hevidence has as equal a love for old Europe and Glenn Hughes-era Deep Purple as much as Yngwie Malmsteen and others in that power metal/semi-shred guild.

An upbeat, almost power-pop ethic takes “Overdrive” into an album highlight reel, featuring a steady rhythmic hook, playful bluesy transitions and a killer lead break from Diego that features an arsenal of arpeggios, tapping, and divebomb elements. Overall much of this material has that jumpy, jam-oriented feel where the momentum builds and breaks off into fusion-ish directions, while still having this smoothness and catchiness on the vocal melody front. Not dissimilar to The Winery Dogs, but with Diego infusing his stellar neoclassical touches to the mix – check out the work of “Out of This Time” and the opener “Dig in the Night” to hear some serious chops going on that bring back a lot of Rising Force memories. Corrado’s natural bluesy comfort in terms of his range and positioning shows the man has studied a lot of the greats – David Coverdale, Glenn Hughes, and Tommy Shaw three of many sure to find favor in his choice of multi-octave note holding and warmth.

When you want that barnstorming, double bass speed number, look no further than “Miracle” – quite the riff charge and equal rapid fire vocal accompaniment that recalls Thundersteel on steroids, while “All I Ever Needed” turns things on more of a 50’s rocker tip turned metal, the bass play hopping and the drum parts very upbeat to give Hevidence a dynamic difference maker. The world could use something a little different from the straightforward Euro power metal acts – and this eleven-track, bluesy, neoclassical outing could be the surprise gem to gain favor in your listening habits.